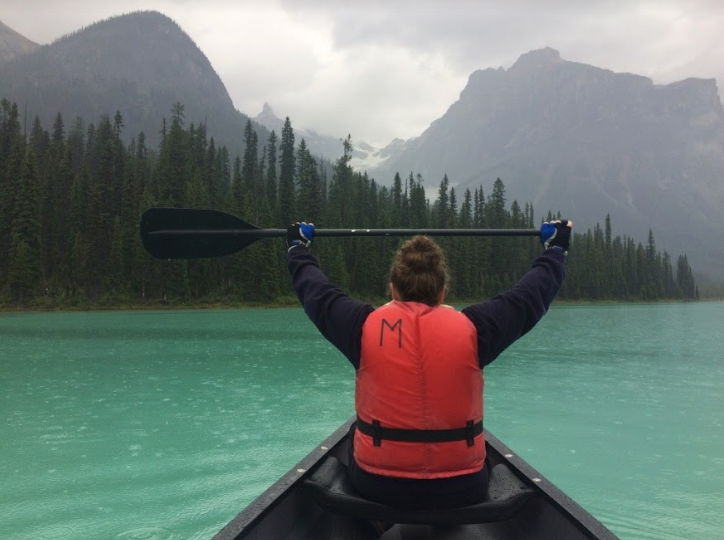 When I commit to do things, I prefer to do things well. Needless to say, I wanted to start life early and get a head start. I surprised my parents by entering the world eight weeks early.

They were going to head to Edmonton that day, Thank goodness I was born in Calgary, Go Flames Go! I started to walk a bit later and I would often ruin my shoes and spent many times getting up after falling down. My parents took me to many physicians before I was diagnosed with cerebral palsy. This happened when I was four, and that is the start of my life breaking down barriers, proving people wrong, and living my best life. My life as a child included physiotherapy, surgery, braces, wheelchairs, crutches, splints, and botox.

One summer my mother hesitantly signed me up to attend Easter Seals Camp Horizon, she was worried, like many parents are. I imagine my 12 year old self was also nervous. I was able to meet people also living with disabilities. I came home that summer singing camp songs the entire way and started counting down the days until the next summer. In 2007 I participated in the Counsellor-In-Training program at camp, learning leadership skills and how to adapt as needed.

Camp was pretty special place for me for a few reasons. I was able to connect with people who lived with disabilities. I noticed the abilities I had in comparison to others. Lastly, I realized that I had a voice that I could use to advocate for my needs and the needs of others.

I had a blast as the 2007 youth ambassador, being the voice of campers, while also participating in every single event that Easter Seals put on in Calgary Alberta. This included entering a team into the last Easter Seals 24 hour relay and tandem cycling up banded peak mountain. I was able to participate in these events with the support of others, an incredible team effort.

I was a pretty shy kid who mumbled when talked. I would often hesitate to ask for help so I could call myself independent. At camp I realized my voice mattered. I spent many years at camp trying different things including rock climbing, rafting, and hiking. Overtime I learnt that it is okay to struggle, it is okay to not be good at something, and it is more than okay to ask for help.

I want to help others, that has always been my goal that I wanted to infuse into my career. I went to the University of Lethbridge and though degree’s switched early on, I still found my passion for helping others in a capacity that i would be able to and graduated with a Bachelor of Arts, with a major in psychology. After this, I pursued more specific training so I could really help others and completed a Masters of Counselling degree at city university of seattle. The Phyllis Davidson Easter Seals ALberta scholarship aided my tuition for my eight years of school. I am entirely grateful for this support and promise that I will take a few more years off before I apply for my PhD.

My work right now within the social services sector is rewarding as I get to witness helpers and support others receiving help. At times I get to advocate for their needs to support their autonomy.

I have grown up playing different sports from sledge hockey to skiing with the para-alpine provincial team, swimming to playing wheelchair basketball at the 2015 Canada Winter Games (and winning bronze), and horseback riding to crossfit. It is quite the diversity though I have learnt many life skills from participating in both individual and team sports. Within life and sport so far, I learnt a valuable lesson at a young age that I have carried through life; if I fell down, I would get back up again; sometimes it was on my own, at other times it was with the help of others. Easter Seals helps to figuratively, at times literally, get up with the proper supports.